From the spot one leaves the auto, man goes 3km and meet the young ever green forests where he lives/chases. We are a team of 2 persons, boy and girl, only in winter we go together, otherwise we go separate, especially the girl, to do recognition or just to revisit. The authorities are lying tremendously about the bears, also in winter about avalanches; from this kind of danger one can easily escape, because the bear will NEVER chase you , neither does the avalanche. In the last recognition which took place on 7-th of july 2019 in Piatra Craiului, on the famous touristic path "Prapastiile Zarnestiului" (a forest road which lasts between 14 km - 30km, though everybody goes the first 4km, then the "E"(toxins) and chemicals from food make them turn back), it was discovered that actually somebody placed some meat to attract the lynx on touristic routes (he hasn't been spotted on marked footpath since 2016 august).
Question is WHY? When the authorities were notified, they just didnt hear it, just as they did not hear when the forest's demolition (massive deforestation)!

Why do you think they let the LYNX turn back - they kept it far for the last 3 years and now he is back hunting innocent people which enjoy sport, solitude and nature?

Shall we suppose first:
1) Maybe they want to kill smb. using a clean method - the lynx will eat all of you leaving nothing behind...but how do they know when that person is passing by? What if another one is passing and the beast will take the wrong one?
2) Since the areal I am talking about develops some kind of weird optical phenomena, it is more probable that military has something to do with the releasing of the beast again exactly where it was 3 years ago;
3) What is the army today? Well, proud to say that none of their fucking soldiers could compete to run away from the beast as fast as the girl does, that was checked personally!
4) Was the beast released at the expence of the people which are not fast runners probably to train some shit soldiers which can shoot if they can find the gun in optimal time :))!

5) Another hint and probably the most fitted one is that maybe the beast - lynx numbers increased, from 16 they become 160, and authorities are not interested to limit them, because they have no fucking profits from killing one..... We had a similiar situation in Bucharest, when the dogs from green spaces become more then 100 in a herd and FINALLY killed somebody they cared for..after chasing and killing hundreds of inoccent other people, for whom nobody is ever responsible! But for that rich one, a "guilty" person was found, which was not in the smallest way responsible, and paid huge amounts of euros...euros which should have been spent by authorities limiting the dogs number when the first person was killed, many years ago!

We trigger the same signal here, innocent men disappear in Piatra Craiului, do not blame the precipice, because those going alone are as trained as gods, blame the LYNX!

Hoping that somebody rich and important will be torn apart very soon in those mountains, such as to enjoy the rest and not the fear of a fight with a superior adversary! 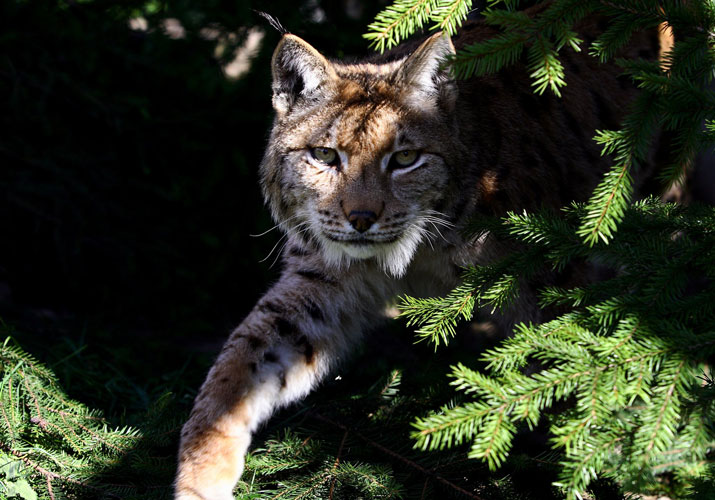 Lynx is related to the tiger, being as bloody as this, but with a smaller size, though big enough to kill a man; it can strech to 2m in length; I do not wish you to meet one big, because this one is not chasing, is bloody killing you on sight! The normal lynx is 1-1,5m length, he stays hidden in young ever green trees like in the picture bellow; that was actually taken just before the chase; he is atacking by jumping from the tree directly on the back of your neck! You will never see it coming, but you will hear it well enough, because he is making a huge noise jumping from one tree to another. He is sly and always choosing spot like in picture bellow....

Pray not to be his prey

because he is not a clever beast like the bear, which can make the difference between one species and another; he is taking every precaution neccessary when chasing; always in thick young forests on both sides, such as, if the target (man) is missed from the first jump (of that I doubt), he can jump fast in the other side of the forest; before jumping he is chasing the man, jumping faster gradually from one tree to another one, asking the men to force his limits in running. He is obviously faster then man, but that, he doesnt know from the beginning; he only knows to measure distance and your rhythm, your endurance; man can escape only if there is another man within 1km distance; this is when he is quitting the prey; otherwise, when he beginns to overrun you, YOU ARE DEAD! He is never chasing more then one person and is always chasing from that kind of small young thick trees, not from big trees where he can be seen. You can call he is not a brave one, but a very cunning beast. It is the only beast which is chasing humans. The rest only defends (bears, wolves, pigs) if attacked.

There is also another hint for which the lynx is kept alive..it cannot be proved with facts, but whispers reveal a dark side of human beings from this country....one cannot say more and definitively one cannot prove some kind of "science" to which only some can "attend" and use.

the environment lovers - we are proud to preserve the nature